The haunting allure of racetracks and electric football 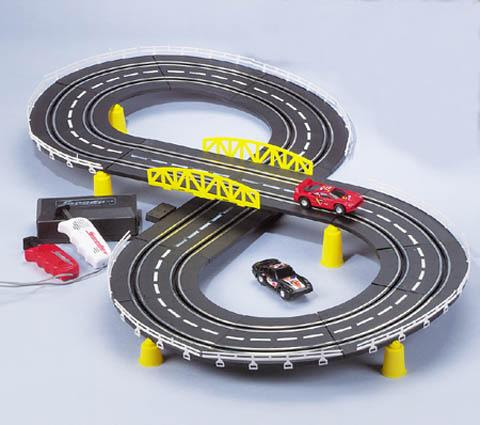 Sunday. Hours of football, a Lakers game and even a little NASCAR on the television. I'm sure some parents watched the same shows I did today and came up with some great ideas for the holidays.

Know what Junior would love? Racetracks!

Get them socks instead.

Two of the coolest Christmas presents the people formerly known as Santa got me as a kid were an electric football game and a toy racetrack. I begged Santa for the gifts and his human helpers came through as always.

They were also the two most frustrating gifts I ever received. Hours of setup, followed by days of frustration and disappointment. It took a few months, or maybe only a few weeks, before each found a home in a basement closet. Every few months we brought them out of hiding and tried them again, only to be met with more confusion and angst. How could two toys that held such promise, that promised hours of fun, deliver so little?

Start with the racetrack. I've never been a big NASCAR or Indy fan. But like every kid I loved toy cars. Along with army men, they're the two toys every male child craves. A racetrack is the next step. Mine looked like the one above. A standard figure-eight with an underpass.

We first set it up on the basement floor, before realizing that carpet fibers are as dangerous to a racetrack as they are a murderer's alibi on CSI. The operation moved to the ping-pong table. There we lovingly pieced the black parts together, eager to finish so we could watch the tiny cars race around it at incredible speeds. Just like in the commercials!

Problems developed immediately after completion of the construction. As the two cars lined up in their tiny grooves - which were already being attacked by dust particles, disrupting the too-fragile ecosystem - inevitably one of the remotes would malfunction. I pushed the trigger and the yellow car sat there, stalled like my old Mercury Zephyr on the side of the road. As if it was just taunting me before, the car fired down the track the next time I pressed the button.

Each car usually made it about four seconds before flying off the track. At first it's an exciting crash, as we were as bloodthirsty in the basement as any drunk NASCAR fan in the grandstand. But the ridiculously high accident rate quickly breeds boredom and outright anger. Teenagers on their cell phones have fewer accidents than our tiny racers, through no fault of ours. Blame the manufacturer, blame the engineers, blame the very science behind the product. For whatever reason, we found it nearly impossible to complete more than a lap or two without one of the cars careening over a rail like a Hollywood stunt car. Victory wasn't the goal in a two-car race. We simply wanted to finish a race, whether we designated it to last two laps or five. No matter how delicately we maneuvered the cars through the turns or opened them up on the short straightaway, the cards did what they wanted to do, the dreams and requests of their human owners meaning nothing. We treated the cars like they were driving under a caution flag: no passing. No risks, and no rewards.

Eventually the remotes faltered completely. Press it for half a second and the car might shoot out like a bullet, apparently hell-bent on going from zero to six in .5 seconds. A few seconds later you might hold the trigger down for five, six seconds and get no reaction from the temperamental vehicles. Then, without any warning, the racing gods might smile down and everything came together. The two cars raced around unharmed for several laps, creating that unique burning smell. A tight race like that teased kids and parents, luring them in for a few more hours of supposed fun. But like always, it would all start falling apart again.

It's why I was never really jealous whenever one of my friends received one of those monstrous tracks as a gift. They had multiple levels, loops, a hundred pieces and room for several cars. No matter. The end result was always going to be the same.

But at least racetracks provided some enjoyment. Electric football? 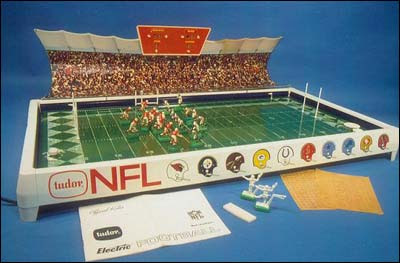 What were the meetings like at electric football headquarters? What was the designer's pitch to the bosses?

"All right. I've been working with Benson here on a pretty cool game that could drastically change the, pardon the pun, field of electric toys. No, don't worry, the risk of electrocution is almost zero. We're gonna have a little table that will represent the field. Paint it green, put some numbers on it, add some hashmark. Then we have these plastic men who will be the players. Yeah, plastic. The game will last forever. They'll find these figurines after a nuclear war. Anyway, we'll have each guy standing in a different position, so even the dumbest of kids can figure out who they're supposed to be. So for the quarterback, it will be a guy with his right arm sticking straight out, even though a quarterback hasn't thrown like that or even been pictured in such a position since Sid Luckman in the 1940s. A linebacker will be a guy standing slightly hunched, with his arms extended in front. He'll be frozen in position, like the poor people of Pompeii after Vesuvius.

"Now, on the bottom of each player will be a little controlling feature. You move it one way and the player shuffles forward. Move it another and he'll 'run' a different direction. Here's where it gets good: The field vibrates. Yeah, like one of those beds at those motels Henry's always taking his secretary to. Heh, just kidding, Hank. It will shake violently, as if the field's at the epicenter of a 10.0 quake in San Francisco. Kids will love listening to the sound. They'll think the field's about to explode. And depending on how they've arranged their players and the controls, the vibrations will cause the players to move. It'll be 11 on 11, so for those 22 players, the kids will have to spend about 25 minutes per figure setting their control up for each play. We're looking at a game that will last a minimum of 11 hours. With this, we really think we can cut into the monopoly Monopoly has on games that take an entire day to complete.

"Nothing will really happen after the vibrations. See, the controls at the bottom are actually meaningless, meant to distract the child. The players will spin in a circle. Sometime they'll fall down for no reason, almost as if they're afraid of contact. The linemen will move downfield on a pass play, committing an obvious penalty. The running backs will just vibrate up and down, almost like they're suffering a side effect from some some untested medication. It'll be impossible to actually pass the ball or even conceive how a pass is supposed to be executed or completed.

"We'll have twenty-two plastic figures congregated in a small circle at midfield, vibrating incessantly, confusing everyone who might think it's actually a toy rugby game. But I'm telling you, that vibration is hypnotizing. Parents see it in a store and can't resist. Kids hear it and think something cool is happening, even when nothing's taking place on the field. They'll start giving the game pet names, like Old Sparky, even when they have no idea how it actually functions or what the plastic men are supposed to do on the field.

"In two years we're expecting that 98 percent of all American children will have this game. And about 1 percent of those kids will have succeeded in actually scoring a touchdown in the game. World Cup soccer games will have more scoring. With this game, we can help raise the next generation of defensive coordinators.

"In fact, we're so confident that not a single person will know how to control the plastic men, that we're going to give the first child who provides documented proof of an actual touchdown a free racetrack as a reward.

"Now, if you'll let me show me the prototype for the hot new toy of next season. We call him Super Toe. Kids are going to LOVE this." 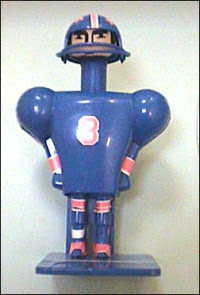 The great thing about the vibrating football game is that from a manufacturing standpoint they never had to make an engineering change!! The one I got in the 1950's is just like the last one they ever made, or heaven forbid still make??

There was one out at the farm for quite awhile, that was probably yours. Yeah, I doubt the science advanced much. Maybe they at least gave the QB a slightly bent arm in his throwing motion.

Don't be knocking "Super Toe". He was a great kicker right up until he suffered the career ending broken leg on about his 5th kick! Talking football was much better...

Super Toe came down to how you set the football. You could do it flat or on its tip like a regular football. And he was a straight-ahead kicker, Mark Moseley-esque. They should make a soccer-style Super Toe.