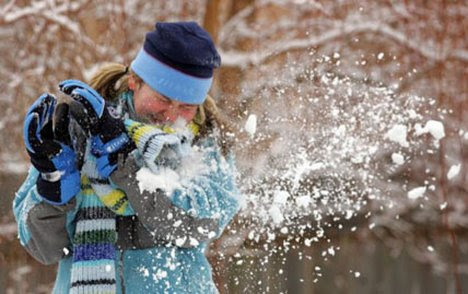 It was about four years ago - a day after a snowstorm like the one that is hammering New York City tonight - that I severely damaged my wife's internal organs with an ice-packed weaponized snowball.

That's her version, anyway. Even after 10 years in America, Louise's African blood has yet to fully adapt to the change of seasons, specifically winter. She still has no concept of "cold," so each morning she asks what the temperature is going to be and then, "What does that mean," as if I have to translate ancient Greek text before she realizes it's time to break out the mittens.

"What does brutal mean? Hat, gloves?"

Say brutal to someone from Minnesota - or perhaps nasty - and they'll know immediately that it's a day to spend inside or bundled up in layers outside. It means biting wind, a face that aches after about 10 feet of walking. But Louise needs specifics, charts, pictures of what can happen to the human body if exposed to wind chills of zero and below. It's a tough way for her to go through life, always wondering if she'll drop dead in a snowbank between December and March because she forgot to ask her winter-veteran husband what to wear.

Winters have tortured her since her arrival to the country in March 1999. She flew into New York, leaving the sun of Cape Town for the distant States. A snowstorm and bitterly cold temperatures greeted the fresh-faced immigrant, who was wearing a short-sleeve shirt and open-toe shoes as she stepped off the plane. Her luck - and winter fashion sense - hasn't improved much since.

This continental confusion goes both ways. During our last trip to Cape Town, I scoffed when Louise said the African sun was different. Different? It's the same giant mass of hydrogen and helium, same Earth, same body, what's the difference?

A few days later, as I struggled to breathe and suffered hallucinations, I finally did understand. It wasn't as hot as a few summer days I spent in Vegas, but the African sun - which sounds like a mythical creature - really did seem different. It sapped me more than the, what, American sun? And in a month, when we're again in Cape Town in the middle of their summer, I'll be the one asking, "What does 32 degrees Celsius mean?"

But in this land my experience guides us. Mostly it's the cold temperatures that torment her. In Minnesota - where the phrase Minnesota winter is as ominous as the words African sun - she's a defenseless creature. Any exposed South African skin is ripe for frostbite. I didn't really totally believe that until last year, when she somehow got frostbite in the shape of a tiny circle on her finger, from a nearly undetectable hole in one of her gloves, despite the fact we were only outside for about 90 seconds. She held it up inches from my face as the final piece of evidence, showing it to me with the zeal of a prosecutor detailing the DNA evidence against a murderer.

But she sort of likes snow, thinks it's pretty and adds something to the drab winter. Still, she claims - and I believe her because I've never seen it in the nearly eight years I've known her - that she's never touched snow with her bare hands. On the surface it seems like a ludicrous argument, sort of like Pat Robertson famously claiming he could leg press 2,000 pounds. But I believe her.

She maintains her curiosity about the foreign white substance. She likes sledding. She likes the idea of skiing.

And, a few years ago, she wanted to know what it felt like to be hit by a snowball. Later she said she had images of sappy movies in her head as she pictured a young lady playfully traipsing through the snow as her husband softly threw a clump of snow at her that burst into a thousand snowflakes, each as beautiful as they are unique. Reality wasn't quite so romantic. Or painless. One day, as we walked across the bridge to the Bronx, I told her to run up ahead of me and I'd hit her with a snowball. She eagerly sprinted as fast as her short legs could take her. I, meanwhile, constructed a snowball. It had to be one she'd remember. I grabbed a bunch of wet snow. Packed it together, rolling it around in my hands a bit to get a better feel of it. Then fired.

I knew I'd made the snowball too hard and thrown it with too much velocity when she went down to one knee, crying out in pain as onlookers stared. I knew I'd done some damage when a large welt formed on her lower back. Um, sorry, honey?

In my defense, it's not like I Nolan Ryaned the snowball at her fragile kidneys. I've never had the strongest arm, though as I proved with my perfectly placed killshot, I did always pride myself on my accuracy. As she rubbed her wound, she wondered, while glaring at me with the eyes of someone who just lost their innocence, "What did you do?"

Looking back it was a bit more solid than it should have been, but I had to explain to her the physics of snow and the weapons we make out of it. Nice, puffy snow does not work. Mine did splatter slightly at the point of impact, but not quite enough. As I said, it was too much like an iceball instead of a snowball. But still, they do sometimes sting, physically and emotionally. They're nonlethal grenades designed to help us get through the drudgery of winter and a snowstorm.

She needed to experience what it was like to be hit by one. It was, inevitably, the last time she's been hit by one. The mark disappeared. No scars formed, at least not visible. But it did give her one more reason to hate winter.

I laughed out loud reading this over coffee this morning! How can Louise have never touched snow? It's lovely outside.... perhaps we should get together and make snow angels ;-)

Snow angels? NEVER!
Good Lord, you would never catch me dead in the snow.