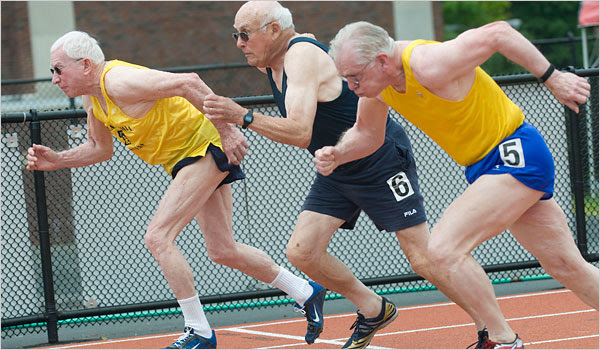 Larry Bird turned 54 on Tuesday. Magic Johnson is 51. Michael Jordan? Forty-seven. Like Bird, Joe Montana is 54. Kent Hrbek turned 50 last May. I always remember Kareem Abdul-Jabbar's age because it's the same as my dad: 63.

It doesn't bother me that the sports heroes and villains of my youth are growing older and simply getting old. They're allowed to age, gracefully or otherwise. They can lose their hair, gain a gut, become a recluse or shill nonstop on late-night infomercials. Seeing them pass through middle-age and eventually into Social Security doesn't make me feel old.

No, I only feel old when I compare my current age to where those sports stars were at a similar spot in life. In other words, Larry at 54 doesn't make me contemplate my own gray hairs or leave me yearning for youth. But when I remember that Larry Bird at 35 was in the final season of his career and was plodding along upcourt with bad legs and a worse back, averaging 20 points a game, well, that's when I feel slightly over the hill. By the time Magic was 35, he'd been retired for three years, had made one comeback - which failed - and served a disastrous stint as head coach, yet he was still a year away from a second on-court comeback.

At 35 Michael Jordan was on his last legs in the final days of the Chicago dynasty, willing the Bulls past Indiana in the Eastern Conference semifinals and then draining the famous shot in Game 6 of the Finals. He'd lost his leaping ability but remained the best player in the game, despite losing some of the athleticism that allowed him to dominate earlier in his career. He developed an old man's game by that time.

Kent Hrbek retired at 34. Troy Aikman was also done at 34. By the time both guys reached 35, one was permanently lodged in an ice fishing house and the other in a broadcasting booth.

When I was a kid, 35 in sports was old. And since sports was my life, 35 was old in real life, too. Thirty-five meant your best days were behind you. It meant you'd lost a step, maybe even two. Or maybe you'd completely lost it and had the common sense to retire. Or maybe you didn't have that sense and your team released you, sending you away with a two-paragraph press release that thanked you for your time and effort with the club.

Now I'm 35. And although I'm not a pro athlete, I still follow them and mark the passage of time through their seasons. And I still play some basketball, trying the best I can to maintain a decent 3-point shot from outside and a turnaround jumper inside. At times on Wednesday nights, as I run up a short court with guys who are, for the most part, older than me, I think, "Yeah, I'm still young. I still have it. I could average 35 a game if I played high school ball now. Thirty if the coach wanted to take it easy on the opposition." But the reality is I've lost a step, probably two, maybe even three. I never had a lot of quickness but when I drive to the basket now, it seems to take an eternity and I can feel myself getting impatient even as I slowly make my way to the hoop. Hurry up! Come on, get those legs moving. I never had great endurance, but now it only takes about five minutes for me to feel the type of lung-burning that normally only happens to people if they're being accompanied by a sherpa.

The day after games, I often develop a cough that makes a pack-a-day smoker say, "Buddy, you gotta cut back on the cigs." Blisters that are about five inches long form on the bottom of both feet, my shins ache and my head throbs. And even though I've never even had a sprained ankle in all my days playing basketball, I now find myself occasionally wondering, "Is this the night when the Achilles' snaps?" Because, you know, that's what happens to 35-year-old men.

Yes, as a kid, 35 seemed old for an athlete, any athlete. Why? Because it is.

No, I don't have any problem with sports legends aging. Just wish I could still play like a 25-year-old.
Posted by Shawn Fury at 12:15 AM

I turn 35 next month... I've given up the competitive 5-on-5, not because i've lost a step or two (I didn't have it to lose in the first place), it's more of a fear of getting hurt and the LONG recovery period that now sets in..And I can't afford to miss work with a injury.. Though being 34/35 does make me appreciate the pro athletes that are still going strong.. KG, Ray Allen and heck, even Favre still impresses me that they can even get out of bed a day after a sporting event. Now, baseball players, that's a different story. You have enough down time between plays and what you've lost in athleticism can be made up by playing smarter positioning..None the less, just the traveling and length of all pro sports season has to make a person age quicker..Not to mention the ability to stay mentally into the game. After playing a 1000 baseball games in my career, I would think that the flame that would be burning my will to win would be starting to flicker and my focus would be turning towards being home with family..

Tell the truth, you gave it up because of the Heron Lake dynasty.

I'd still like another crack at them, although I heard they were supplanted by the Dekker dynasty in the league. Still, next year we could have a reunion team. I'll still light it up at the Fulda gym.

Injuries can be bad. A thirtysomething friend tore his Achilles two years ago. The surgery for that was okay but then he got blood clots in his legs that very nearly killed him. Pretty high price to pay for old man's basketball.

Thanks Shawn!
A picture is worth a thousand words,so they sey (and I agree!) especially the one with the old geezers that I just pulled from your blog post (http://shawnfury.blogspot.com/2010/12/aging-athlete.html). Hope you didn't mind, but I did link to the source on my blog (http://athletewithstent.com).
Very much appreciated.
Kevin (old geezer in training)