The time David West threw a no-hitter in Strato 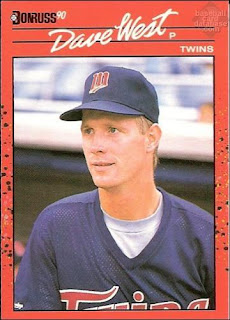 The cover story in the new Sports Illustrated - which arrives here on Wednesdays, a perk of living in New York - is about the dominant pitching performances this season. It's the year of the pitcher, just like in 1968, only without the ridiculously high pitching mound.

There have already been four no-hitters. When a real-life baseball accomplishment makes the news, I often think back to make-believe baseball. Specifically, Strato.

I wrote about my obsession with the game here. Most of the time, we used cards from the 1987 season. But one year, my friend Brandon bought cards from the strike-shortened 1994 campaign. Like 1987, that year had some absurd numbers, from Matt Williams to Frank Thomas to Tony Gwynn. It was one of the years of the steroid.

But those cards also produced the only no-hitter we ever witnessed in Strat-O-Matic baseball. It's gotta be even harder in fantasy baseball to throw a no-hitter than it is in the real thing. In Strato, you're utterly dependent on the roll of the dice. No matter how good a pitcher's card, if it lands on 1-5 and you're facing a power hitter, the ball is being launched an imaginary 400 feet over the wall of whatever stadium you and your equally in-need-of-a-girlfriend friend are playing in.

In all the hundreds (thousands?) of games we played, there was only one no-hitter. And the man who threw it had a better career as a trivia answer than he did on the mound.

David West was an underachieving left-hander who at one time was supposed to be a star of the future for the Mets. Like so many Mets products, he failed to live up to the hype. In 1989, the Twins acquired West in the Frank Viola trade. He toiled in Minnesota for a few years. In 1994, the year of our Strato cards, he went 4-10 with the Phillies, although he had a respectable 3.55 ERA. Still, there were hundreds of pitchers who were better candidates to throw a no-hitter in Strato. He didn't have a bad card, but no one would call it good. He probably only made my Strato team that year because it was one of those ludicrous seasons when we decided to play with 50-man rosters.

One Saturday afternoon, I sent West out to face Brandon, in a game that took place, as always, in my parents' basement. From the beginning, both of us sensed something in the air - and not just dangerous levels of Radon. West cruised through the early innings, though he gave up a couple of walks. But for some reason, Brandon kept rolling the dice and it'd go in West's "good column," or in the bad column for each of his hitters. I scraped together a few runs in the middle innings, giving West all the support he needed. By the fifth, I began needling Brandon about the history taking place, though I didn't really think we'd see a no-hitter. By the time we played this game, we'd been playing Strato for several years. We'd seen everything in Strato, from three-homer games to a disgraceful performance by Team Brandon when he kept Frank Viola on the mound for a 14-inning affair, simply out of spite and against our unwritten rule that we adhered to reality with game situations. But never had there been a no-hitter. As far as we remembered, no one had even taken a no-no into the seventh.

But West did. He kept walking hitters; I think he ended up with seven walks. But Brandon kept hitting into lazy fly balls or weak grounders. Breaking all baseball tradition, I openly talked about the no-hitter, but only to remind Brandon of the humiliation being inflicted on his squad.

West struck out about eight and by the eighth inning, Brandon screamed with every out. His team always seemed to have a black cloud hanging over it, but it seemed impossible that his franchise would suffer a no-hitter at the hands of the too-tall West.

As we went into the ninth, Brandon seemed resigned to his fate, like a man on death row who hasn't heard officially that the governor's turned him down but knows what is coming. I taunted Brandon, and his hitters. The first man struck out, the second hit into a ground ball.

The game ended with a strikeout, the 10th of the game for West. I threw West's card in the air, the same way the imaginary lefty threw his glove sky-high after making baseball history. To this day, it remains one of the more improbable sporting experiences I've ever witnessed. It wasn't like a scrub throwing a no-hitter in baseball. Any pitcher can get hot in real-life and throw one. No, this was more improbable. For comparison, you almost have to look at a different sport. This was like that night Willie Burton scored 53 points in an NBA game.

David West! The man who had an ERA of infinity in the 1991 World Series - he never recorded an out while giving up four runs on two hits and four walks. That David West. It was all too much for Brandon, who simply said, in a quiet voice, "I hate my team."

And he did. But a decade later he still remembers that game. He might have hated his team - and David West - but he loved Strato. And he was part of Strato history.
Posted by Shawn Fury at 10:40 PM