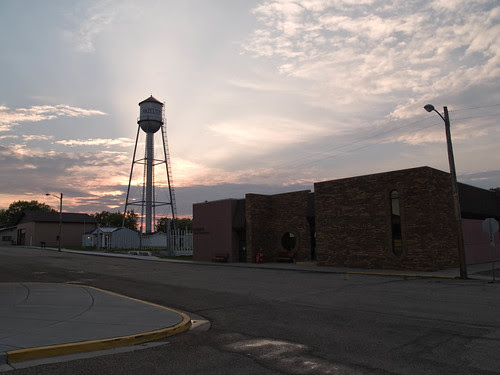 Yesterday, a picture of Michael and Jeanette Tristani kept popping up on Yahoo! whenever I'd check my email. The couple looked happy enough, but they told a depressing tale. The story focused on the Tristani family's struggles adapting to life in Hazelton, North Dakota, a town that's about 300 people shy of being classified as a dot on the map.
Hazelton, which had 237 people in the 2000 Census, attracted outsiders to the town with offers of cash and land: free lots and $20,000 for homes, $50,000 for businesses. The Tristanis ventured north from Miami. Hazelton's about as far away from Miami as you can get, and I don't mean geographically. The family appreciated many things about their new life in a new town - low crime and taxes, great cost of living, kids liked school - but struggled with some other aspects of small-town life, including a perceived indifference or downright dislike of outsiders. If you weren't born there and raised there and your grandparents aren't buried in the Lutheran cemetery a mile outside of town, you aren't one of them and never will be. That type of attitude. Or, as Jeanette Tristani said in the story, "People prejudge you without getting to know you."
That's what the Tristanis say they experienced, along with exposure to the type of cold they'd only read about. Other small-town dramas that drive out longtime residents and newcomers include a lack of high-paying jobs and the eternal complaints of anyone over the age of 15 that there's "nothing to do in town." These gripes aren't new. Sinclair Lewis knew all about small-town life. People have expressed similar sentiments since the time people realized there was a world outside of their little village of 1,500 people.
Compared to Hazelton, Janesville is a metropolis, clocking in with about 2,000 people. We had it easier than many places, as the town's only 60 minutes from the Twin Cities and 15 minutes from a decent-sized city in Mankato. And, yes, I write only 60 minutes without quotation marks around only. It really is an easy trip compared to what many towns face.

There's a single stoplight, though it only flashes red now. Budget cuts eliminated green and yellow. But there's a bank and a post office. A Dairy Queen remains popular and a Subway sits near the edge of town. The town's population has remained fairly stable over the years, but there are other struggles. Enrollment is way down, as students open enroll to nearby schools, often to schools in towns that are even smaller than Janesville. The newspaper office closed. Other businesses have faltered. It's a story that's been told in countless small towns everywhere, including Hazelton.

Growing up, most people who moved to Janesville didn't come from outside the state. A family did move from war-torn Cambodia and struggled at times with the small-town mentality that can occasionally convert to outright hostility. They eventually moved to a larger city and one of my best childhood friends was gone for good. But then, that kind of mentality is not unique to towns with population below 3,000. It's just that in those towns it might be harder finding friendly faces.

For newcomers to any small towns, part of fitting in relates to where they've come from. Hostility is not the default setting for small towns. There will be welcoming arms, though it might take some work to find them. A person's experience makes a difference. When I wrote Keeping the Faith, I spent several months in Ellendale, North Dakota, a conservative, deeply religious small town that's 30 miles from the nearest McDonald's. After a few days I felt at home, owing mostly to the generosity and friendliness of people I had just recently met. I might have had an easier time settling in because I came from that environment. I had been living in New York City, but my roots were still in Janesville. Someone without that background might have taken longer to feel accepted, though the reception from the townsfolk would have been exactly the same.
Some of the small town cliches are true. The people are generally more conservative, though that can devolve into caricature as well. Small town liberals like hunting just as much as small town conservatives, and simply knowing how to shoot a deer doesn't make someone unique in those towns, no matter their gender or political aspirations.

Growing up, it does seem like everyone knows what you're doing. Think of a small-town gossip queen and the image of an overweight 55-year-old woman who sports binoculars that see nearly everything in town and has a mind that imagines the rest immediately springs to mind. She talks about the drinking problem of Mr. Johnson. She hints at infidelity in the Olson marriage. And did you hear about young Laura Smith? Seems she'll open her legs for any boy who asks. It's not quite that blatant. Rumors spread in checkout lines and church dinners. A father's reputation can become his son's reputation, no matter how different they might be. There's no place to hide, for better or worse.

Friday night entertainment often consisted of driving up and down Main Street for hours at a time, a never-ending cycle of U-turns, slow cruises and nods of the head to schoolmates making the exact same drive in other cars, a generation after their parents navigated the same short route. For people with kids, the value of small class sizes might not make up for the other lack of opportunities.

It's difficult to adapt to a life in a place where the pros and cons are both often about what's not there, whether it's noise and crime or high-paying jobs and cultural outlets. A lifetime New Yorker would have more trouble adapting to a town of 1,000 than a small town lifer would have adapting to the Big Apple. Obviously a lot of that has to do with what each person is giving up, but it also requires a different mentality.

So what are the other benefits? Space. Big yards for low prices. A tight community, even if some find it suffocating. But there are times when it's good that everyone knows everyone else's business, because townsfolk will help those in need in whatever way possible. A town rallies around a young mother stricken with cancer or a dad injured in a farming accident. It's impossible to get lost in the masses. You'll never be a statistic.

When young people "leave" a small town, I think it usually has more to do with economic reasons than a desire to flee the lifestyle. It's not just about jobs in the towns themselves. The jobs have to surround them as well. Often, people live in a small town but commute to a larger city where factories and offices are located. Layoffs 30 miles away can fatally harm a small town. Many people in Janesville used to work at Brown Printing and the manufacturing plant E.F. Johnson, a pair of companies that at one time employed thousands but eliminated countless jobs the past 15 years.

It's difficult to create viable businesses in small towns. The Tristanis opened a bistro and coffee shop. They clashed with the owner of another coffee shop and eventually closed theirs. But should that necessarily be an indictment of small towns and their reluctance to welcome newcomers with open arms and empty stomachs? Thousands of restaurants, bars and shops fail every year, no matter the population. On our Manhattan block, bars and delis have come and gone, many forgotten shortly after they displayed the first dollar spent in the store. It had nothing to do with the neighborhood's hostility or the way they prejudge people and everything to do with economic difficulties that confront anyone gutsy enough to start those businesses. The Tristani family's entrepreneurship is admirable. But does Hazelton have enough people to support a coffee shop, much less two, no matter how cozy the setting and tasty the drinks? People aren't going to drive to Hazelton to visit the business, so it comes down to whether 200 people can keep a business alive that offers something many might see as a luxury, not a necessity.

Again, that seems to have little to do with small town people prejudging others or refusing to accept outsiders. And even in this story, those factors don't seem to have necessarily driven the family from North Dakota, as the main reason they moved back to Florida was to care for Jeanette's elderly parents.

As the Tristanis discovered, small-town life isn't for everyone. And all indicators seem to prove that it's for even fewer people than it was decades ago. I just don't think the struggles are all about a hesitance to welcome newcomers or accept change. There are close-minded people ins mall towns. Just as there are in big cities. The decline of small towns might simply be inevitable, another step in the evolution of economics and demographics. But for those who have been there their whole lives and for those who leave their old homes for a new one, small towns still have benefits that can appeal to everyone.

I love the big city life. I now preach its virtues to anyone who will listen, but I remain a small-town kid. That will never change, even if I’ll probably never again be a small town resident.
Posted by Shawn Fury at 11:14 AM

Awesome article. I came from a small town myself. I recently started a FB page entitled... I escaped (location) and overnight I've had 55 people join. All from my small town, all of them escaped for the same reason: lack of jobs. Another common theme, If I won the lottery I'd return. It's sad that small towns have come to that, but it's true. Thanks for your insight.

Even if we won the lottery, I don't think my wife would let us move back. But we could build a hell of a summer home there.