Let's go to the videotape 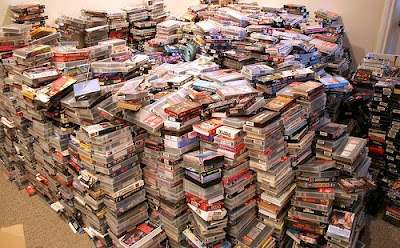 Fall cleaning, primarily in preparation for my parents' arrival in New York this week, inspired me to properly pack up some of my most cherished possessions: my videotapes. That doesn't mean throwing them away, which has been suggested at various times by another member of the household. Instead, I separated them into sports and non-sports, longingly caressed tapes from the 1987 NBA Finals, and fixed some faulty labels that were peeling off like a bad paint job.

While I also own a healthy number of DVDs, I cling passionately to my dozens of VHS tapes. I've been collecting them over a span of 22 years, ever since mom and dad brought home our first VCR, which back then probably cost something like $500 ("And you can tape in either SLP or EP mode!"). And I also add to the collection every year. I don't TiVo, I tape. Few events merit the next step, earning a label on the tape. Every Lakers playoff game gets labeled and saved, as do many classic sports events that pop up on ESPN Classic, MLB Network or during rain delays of tennis or golf events - "Hey, it's the final round of the 1986 Masters with Nicklaus, get a tape." A good movie can still earn a white strip too.

They're not kept around simply because I can't throw them away and suffer from a hoarding problem. On the new A&E show about hoarders, appropriately named Hoarders, people with real problems are on display. Some struggle with tossing away old meat. Meat. Compared to spoiled beef, refusing to part with a 19-year-old tape that has Turner & Hooch and Rainman on it doesn't seem so bad. Plus, I actually do watch the damn things quite often. Many are still in remarkably good shape, compared to some of my new DVDs that have a scratch or a smudge or a piece of dust lodged somewhere that's causing pausing and skipping and swearing and frustration.

Tapes teach patience. Forget scene selection on the DVDs. If I want to watch Leslie Nielsen umpire in The Naked Gun, I have to fast-forward through five hours and 30 minutes of action. Think how much more you appreciate a scene when you have to win a war of attrition with the entertainment system to get there.

Tapes promote attention to detail and put your eyes to work. Forget HD. If I want to watch the Cowboys hold on against the 49ers in the 1993 NFC Title game, I have to peer through the fuzziness and haze that descends on the tape toward the end of the game.

Some of them I was afraid to touch. One that's home to Stand by Me and a Richard Jeni special had stains on it from three separate decades. That went to the bottom of the box, as I'm actually leery of putting it in the VCR, no matter how badly I want to watch the Barf-o-Rama.

Three or four tapes were just labeled "Letterman." Even though I discovered them hidden away in a dark corner, the content had nothing to do with extortion, but were simply old NBC shows and some early CBS ones.

The 1992 Final Four takes up a couple of tapes. The Twin Cities hosted the event that year, as Duke won its second straight national championship, a week after Christian Laettner hit perhaps the most famous shot in college basketball history to defeat Kentucky. While I don't have that classic game on tape, I do have the semifinals and finals. Instead of starring in those games, Laettner foreshadowed his future time in Minneapolis with the Wolves by playing poorly and pouting despite having the best hair on the court, although Duke still won handily over Indiana and Michigan.

Here's a tape with the original V series, when the Sci-Fi channel re-aired it in the early 1990s.

Many aren't labeled at all and those can be the most exciting ones. Pop it in the VCR, hit play and whatever comes on is a surprise. Ah, here's a random episode of Cheers from 1989. And then a KARE 11 newscast from 1991. Followed by the series finale of Cheers. What's on this one? Okay, why was I taping Jake and the Fatman episodes?

There's lots of sports. Probably too much sports. It's like a poor man's - and poorly organized - NFL Films. There are Super Bowls - the Cowboys' victories in 1993 and 1994 - and eighth-grade football games. Our eighth-grade team was one of the more dominant squads in football history, thanks to our adult-sized star running back, who stood about six-feet-tall and ran the 40 in about .45. He ran like an in-his-prime Earl Campbell.

One of the tapes has a game from that season, where he looks like Gulliver rampaging over helpless 13-year-olds in ill-fitting pads and helmets. The tape also contained three eighth-grade basketball games. On them I appear to stand 5 foot, 2 inches tall and everyone's shorts were basically indecent. But, hey, I had a decent jump shot even back then.

Anytime I want to I can watch Magic Johnson pull his hamstring in the 1989 Finals against Detroit, and since that's never that tape probably hasn't been watched more than two times since that awful June night. I'll put that one at the bottom of the box too, right next to the stained tape.

I've got dozens of Seinfeld and Simpsons episodes recorded, even though I now own many of the same episodes on DVD.

"So why can't we throw the tapes away?" Louise asks.

"For the original commercials," I respond. "Those are classic."

I'll never throw those episodes away. And, unless they deteriorate too much or the material actually begins dissolving or VCRs are forever banned, I'll probably never dispose of any of the tapes. They'll stay safely tucked away, so company doesn't have to be confronted by their ugliness or the poor handwriting on the labels. Someday, actually, I'll come back into possession of about 75 more VHS tapes. Many of my old ones never made it to New York, but instead still reside in my parents' basement, just waiting for their chance to be played. Who knows what poor-quality treasures await.

I can hardly wait. Even if Louise can.
Posted by Shawn Fury at 11:53 PM

If you need the Kentucky/Duke game on VHS to complete your collection, i'll mail it to ya!